Auto Fill a Google Doc from a Google Form Submission

It’s been awhile since I have written anything to do with Google Apps Script, so I decided to start exploring some features of the Apps Script world that are new to me.

When I first got started with Apps Script almost 6 years ago, there were lots of things I wanted to do, but just didn’t yet have the skills to figure out or tried but ran into a limitation on the Apps Script platform. Now that Apps Script has matured, it’s time to revisit some of those early desires.

In this tutorial, we’re going to look at a workflow that should have a large swath of utility for people who read this site. We’re going to take a Google Form submission and then use that data to populate a custom template in Google Docs.

Getting Our Google Form Ready

To get started, we’ll need to create a Google Form to accept submissions and a Google Doc to act as our template.

For this example, I just created a basic form to accept some data that looks like this: 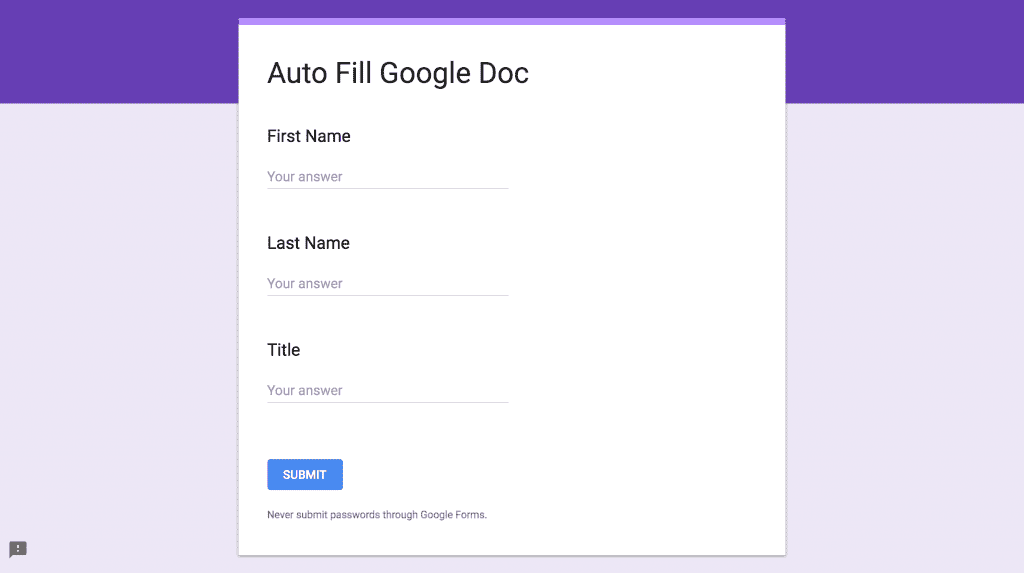 As you can see nothing fancy going on here. I created a spreadsheet to accept the responses, as that is ultimately where our code will live that will generate the Google Doc. 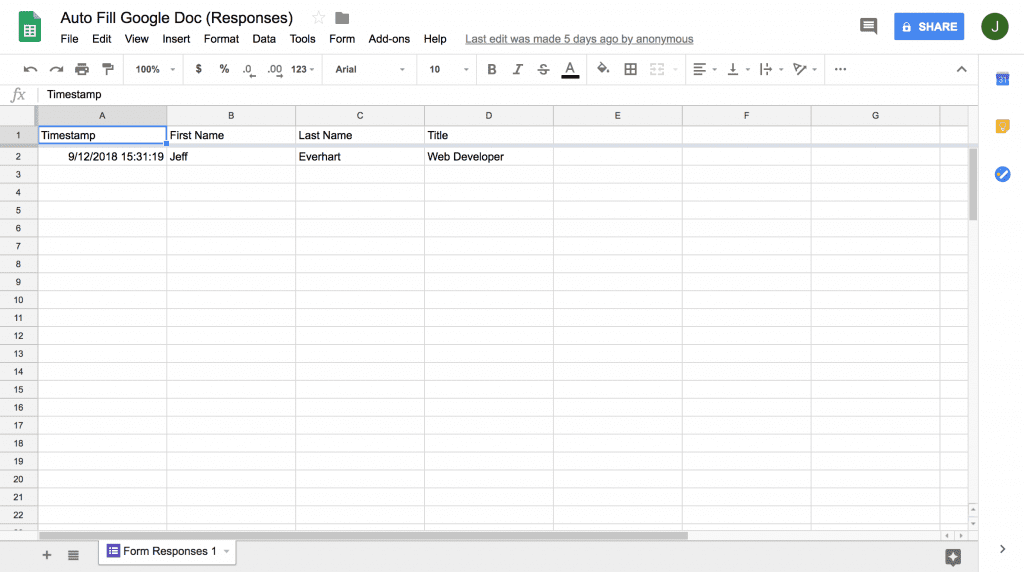 As you can see, this is a pretty basic document, but since we are just making a copy, your template could include lots of different styling, images, etc. if you so desire.

There are a few important things to note about this template though. There are several ways to populate a Google Doc using Google Apps Script. One way is to programmatically create the document using code, meaning we would add the different document elements one by one using a script.

While that is possible, I found it very difficult to do, especially when trying to create a document with an kind of sophistication or styling.

The other way involves the strategy we’re taking here. We make a document that acts as a template, then we look for certain pieces of text within the template document, then replace those pieces of text with live data when our form is submitted.

While that is only one possibility, there are a few others that are commonly used:

At the end of the day, really all we are focused on is creating a unique tag that we can find later. Using some sort of character as brackets helps with this since two curly braces is an unlikely pattern to find elsewhere.

Another best practice here, just for you own sanity, would be to make sure that the text inside your brackets matches the header in the spreadsheet.

Now that we’ve got everything setup, we can look at the code that will make all of this happen. For those unfamiliar with how to write a basic Google Apps Script project file, you might want to check out an earlier post where I go over the process from beginning to end.

For this tutorial, I’ll assume that everyone knows how to open Tools > Script Editor to edit a script file and set a form submission trigger on a particular script.

The code below is fairly well commented to show the intent of each line, so I won’t rehash a bunch of it here:

Some things to note about this project, myFunction is what gets called when the form submission trigger runs, and it passes in the form values as the ‘e’ parameter to the function. This script makes use of both the DriveApp and DocumentApp classes of Google Apps Script, so be careful when writing your own version to distinguish between what is a Google Drive file and what is a Google Document.

Setting a Trigger On Form Submit

Now that we have all scripts and Drive resources in place, we need to add a trigger to our project so that the script runs whenever a form is submitted. To do that, we can navigate to the ‘Edit’ menu in the script editor, and then click on the “Current project’s triggers” option. 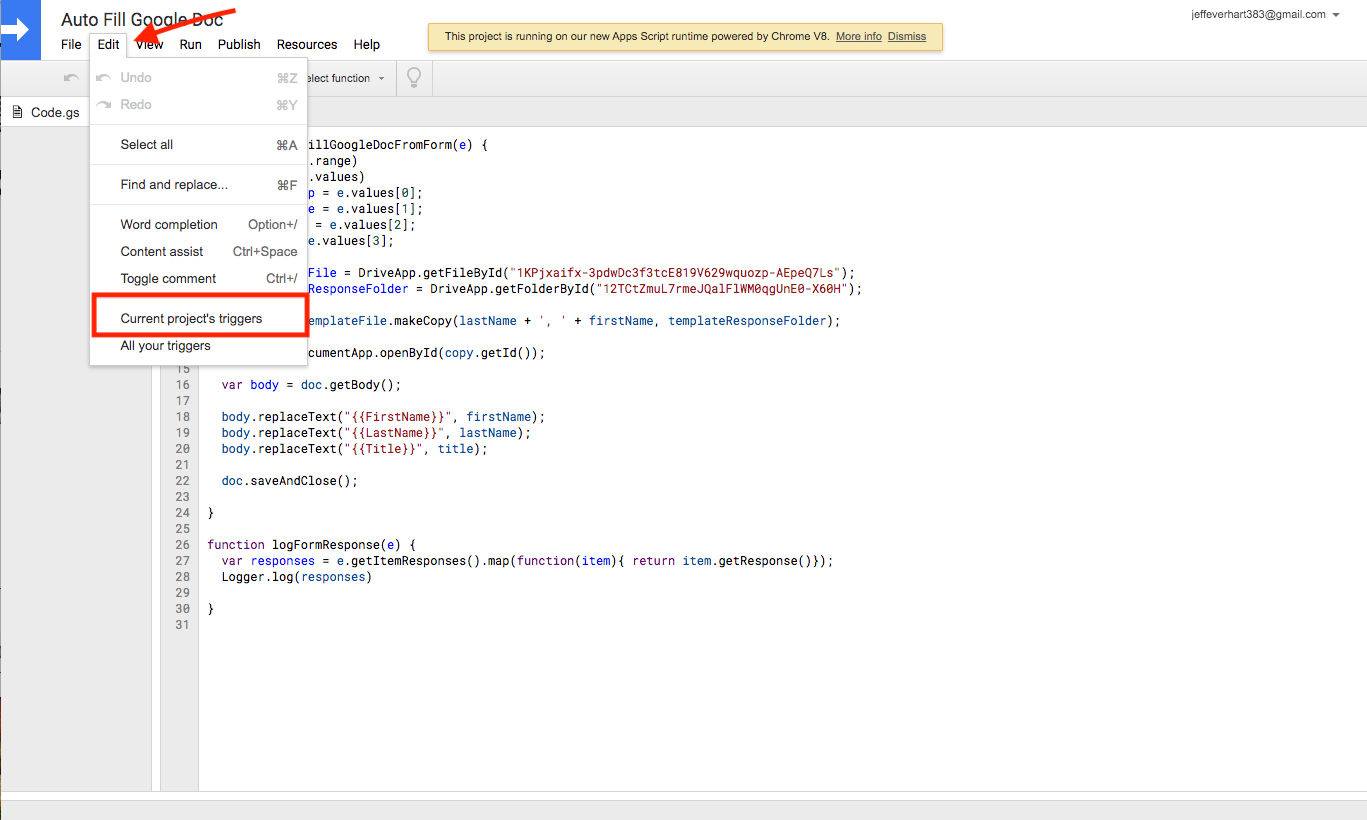 The trigger editor will open up in a new window and show us all of the triggers associated with a project if there are any. To add a trigger, click the ‘Add Trigger’ button in the bottom right of the screen, which will open up a modal menu with options for setting the trigger.

First, we want to choose the function that will get triggered, in this case ‘autoFillGoogleDocFromForm’ will get selected. We can leave the deployment as ‘Head,’ unless you know what you are doing here. Then, we want to select ‘From spreadsheet’ as our event source and “On form submit” event type. All of those settings ensure that the correct data gets passed to our script when it is triggered.

The last setting, which is an optional recommendation, determines how often you are notified of errors. My recommendation is set that to notify you immediately. Once you’ve sorted that, we can click save and our trigger will be active. You can give it a try by submitting a test form.

It took me a while to figure this difference out, but it can be summed up like this: all Google Docs are Drive files, but not all Drive files are Google Docs. Google Drive controls things about the file, like where it lives, who has access to it, and how we download it, but to make changes to a file that is a Google Doc we need to operate on it using the DocumentApp class.

After submitting our test form, we end up with a Google Document in the folder we specify that looks like this: 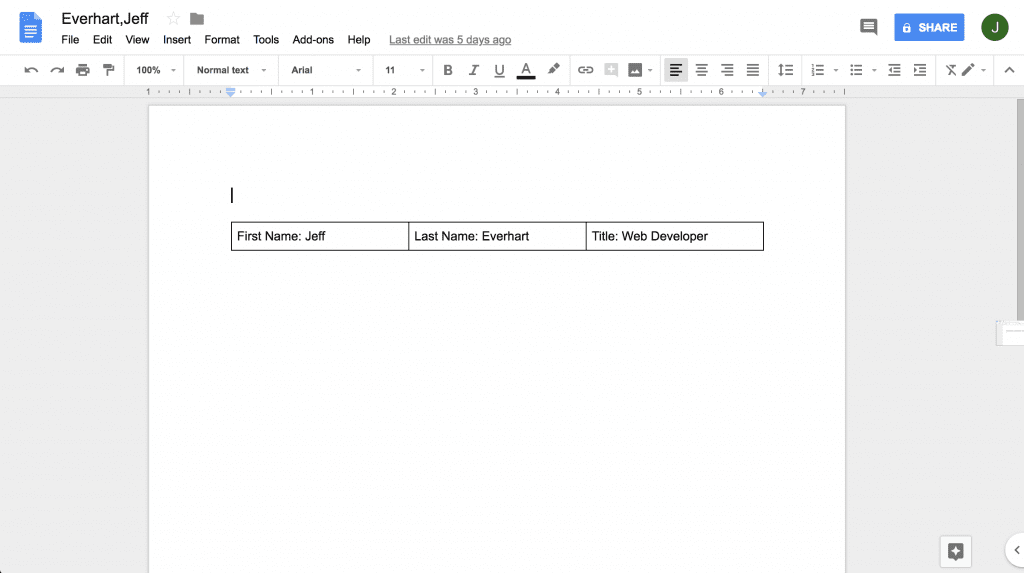 While this is a pretty simple example, I foresee lots of use cases for a workflow like this, from creating certificates to populating invoices or purchase orders, this should be another helpful tool to keep in your Google Apps Script tool belt.